Here is a strange phenomenon: apparently people in the city have simultaneous insatiable cravings for 'healthy' exotic smoothy type drinks and inexpensive hot dogs. Come to think of it, I often feel a craving for the succulent savory flavor of tube-meat after eating a well balanced and nutritious meal, so maybe it's not all that strange.

Anyway, there are a whole bunch of places in the city that fit this bill and, to the untrained eye, they may all seem exactly the same, especially since their names consist of a similar combination of the word 'Papaya' (for the featured smoothie drink) and some qualifier.  As it is right now the three most visible are:

You can see where confusion might occur.  While the hot dog itself is basically the same damn thing at any of the locations, there are some important difference that I'll share with you here.

This is the original smoothie/hot dog place, located in a posh neighborhood on the upper east side.  Actually, it was originally located in a Polish neighborhood, and all they really wanted was to serve fruit drinks, but the eastern European working class denizens of the time demanded the delicate flavor of griddle-fried meat sticks, so they added hot dogs to the menu. 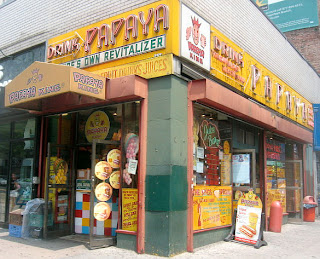 The Tradition continues today as they still serve a bizarre blend of salty meats and 'healthy' drinks.  Of all the varieties in the city, Papaya King has the most diverse collection of hot dogs and toppings as well as the most variety in drinks, smoothies, and fresh squeezed juices.  They're also the only one to expand outside of NY, having opened a location in Hollywood.

Like so many other tales of innovation and greatness, this one too has enough drama to keep it interesting.  In 1973 one of the partners of Papaya King broke off from the mother ship and created... 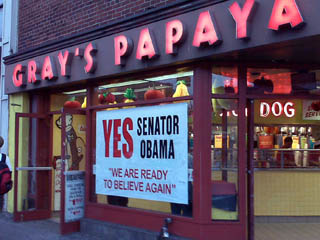 Even more than it's parent hotdoggery, Gray's Papaya has arguably made the biggest splash in the healthy drink/hotdog combo world.  It's made appearances in movies, television, and even politics (mostly famously endorsing President Obama during his presidential campaign).  They have the most streamlined menu of all the different dog/fruit places offering a simple selection of smoothies and hot dogs to eat, no sausages, no chicken fingers, no nothin'.  I'd also say they're the nastiest of the places (at least, the upper west side location) and the most overpriced, but I guess that's the cost of eating trendy.  Finally, there is:

PAPAYA DOG
Perhaps it's my inherent soft spot for the underdog (pun intended), but of all the locations mentioned, this is the one I frequent the most. 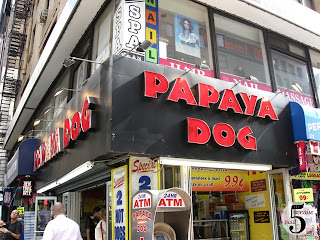 I don't know where Papaya Dog came from, I don't think it has such a sordid past as Gray's Papaya, it's probably just a regular old knock-off, but it's cheap, has a melted cheese topping for hot dogs, and offers a whole bunch of other great crappy foods like fries and hamburgers and even vegetarian options, which, indigestible as they are, at least go with the whole theme of the healthy smoothies.  Let's get to the ratings, shall we? 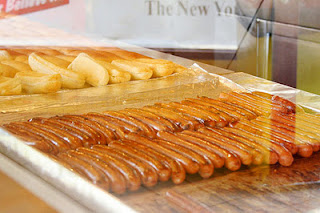 Honestly, they really are all about the same, and quite similar to Nathan's Coney Island dog.  I know hot dog connoisseurs around the city are freaking out as they read this and I'm probably losing tons of street cred by saying so, but it's basically true.  They're long and thin and salty as hell, but they beat the pants of a dirty water dog from your typical street vendor.  Papaya King and Papaya Dog both offer a sausage dog as well, which is basically the same damn thing just fatter and fits in the bun better, which I like.  The bun-to-dog ratio is very important.  (Ok, the sausage at Papaya Dog is inferior to that of Papaya King, but Papaya Dog is two blocks from my house, so I'm biased).
Accoutrement: 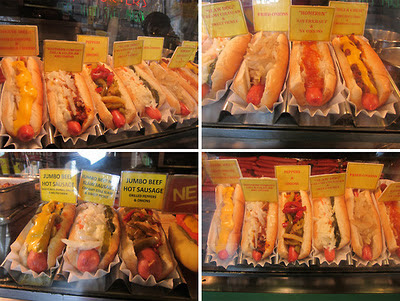 
I haven't given a 5/5 in this category yet, but I'm doing it because they've provided an option I've never seen before: eggs.  They offer what I've always looked for, a genuine breakfast hot dog.  They also offer fries on their dogs, crunchy onion, chili, cheese, the whole nine yards.  Except mayo, only Papaya Dog seems to offer that, which for me is a necessity to fully enjoy the dog experience.  Papaya Dog doesn't offer quite as much exotic variety as it's Kingly older brother, but it has plenty of topping variety including chile and cheese, onions, and all the standards.
And then there's Gray's Papaya, silly place that it is.  Only Ketchup and Mustard.  Oh, and onion.  They may also have Kraut.  Totally inadequate.  For being such a famous place you'd think they'd offer some decent options, but perhaps there is a certain elegance in simplicity.  If you're into that sort of thing.  Me, I like toppings, hence the low rating. 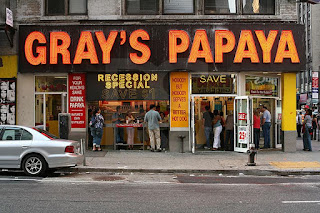 All these different spots have basically the same special, a combination of dogs, usually two frankfurters, with a drink (sometimes fries thrown in) for around $5.  It's really not bad at all, though by comparison to the others, Gray's Papaya falls short.  Papaya King is a touch more expensive, but I do have to admit that the quality is better.  They also have the best variety of combination options.  Papaya Dog has a number of good combo options and is the cheapest, though the lower quality of the sausage is a bit of a bummer.  Frankfurters are basically the same though, and they're combo comes with fries.  Gray's, however, is the same as Papaya Dog, but a dollar more with no fries.  Generally, a big lose. 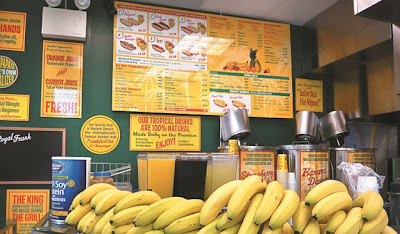 Papaya King just offers lots of cool stuff, including fresh squeezed juice, which is great.  Papaya Dog offers all your basic fast food items, sans pizza, but the variety makes it easier to cajole your mom, girlfriend, coworker, etc. to go there with you since there's something for everyone.  Gray's only offers dogs and smoothies, which they all offer.  It's a cool extra for a hotdog place, but in comparison they are way behind. 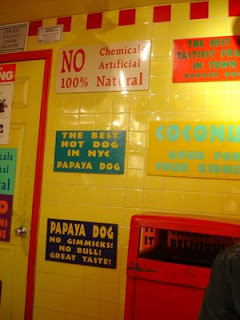 When it's all said and done, you can't beat the king; they've got options, class, and history on their side.  If you happen to be in the neighborhood then definitely check it out.  Papaya Dog gets a 4 because I go there all the time and the value is really quite outstanding.  The atmosphere sucks and I wouldn't use it as a date spot, but in a pinch it's great.  Gray's is also decent in a pinch but I always feel a little ripped off.  I'm bummed by the lack of topping and other options and that extra dollar feels like a hefty expense for what you get.  So, now you know.  Choose wisely.