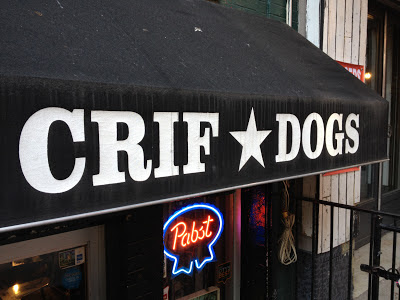 After everything I'd heard about this place, I was expecting something a bit more....grand. Most of the other major dog places in the city have bright and huge signage, multiple locations, and are, well, ABOVE ground. When I walked down the stoop into this punkish underbelly of the lower east side I realized that its understated nature IS the appeal of the spot. 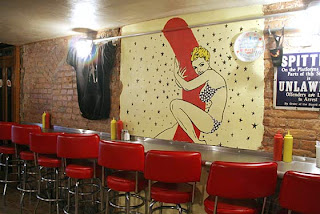 Crif Dogs opened in 2001, and it retains the gritty feel of an older lower east side even while the neighborhood becomes more and more overcome by the encroaching hipster culture and the pretentious denizens of NYU. Crif dogs comfortably nestles in an area filled with pipe shops, tattoo parlors, edgy thrift stores; when I walked down the stoop into the semi-underground shop and saw the video game machines dating back from the 80's (Double-dragon anyone?),  I knew I had found a true hipster heaven. My only hope was that, like so many fads, there was some sort of fabulous underlay that caused all this hype in the first place.


In the end, it's just a bunch of mystery beef and pork bits, but it's still pretty tasty. They have a couple of different options, the 'snappy all-beef frankfurter' which is basically an NY Coney Island type dog, and the 'Crif Dog' which is a handmade pork and beef mix.  I personally like the all-beef version better, but I appreciate their daring do and the Crif Dog is quite good as well.  The only reason is doesn't get a 5 is because Kobe-Beef dogs exist in this world, and there has to be room left for the best.  All in all, a tasty, snappy, quintessential type dog.

Acoutrement: 6/5
Look, I know this isn't a real score, but any place that offers sour cream, pineapple, scallions (all together mind you), or bagel seeds (something else I'm pretty sure isn't real) than you get extra credit types of points. Crif Dogs has a substantial menu, considering they basically just serve hot dogs, and it's all because of the different combinations of toppings. Cream cheese, you can get a cream cheese dog. It's almost offensive in its boundary breaking.

Value: 4/5
A basic dog will run you less than $3, many of the toppings can be had for free, and the more exotic combinations don't add up to more than $5. That's only a touch more expensive than a Nathan's Famous, but you get real toppings and don't have to swim through a deluge of tourists. In addition, they have value packs that are mysterious assortments of food not divulged on the menu. I'm saving that for a future adventure.

Other: 5/5
Tater Tots.  Need I say more?  They also have a secret speakeasy in the evenings that can be accessed through the phone booth.  It's called Please Don't Tell. Oops.

Not gonna lie, I've already been there multiple times. If I could drag my ass to the lower east side more often, I'd likely be there weekly, it's that good. I've also brought friends, cousins, and girlfriends to check it out. You should too. And then you should take me. And then I'll take you. And then we'll just go together as buddies one more time. Yup.
Posted by Street Meat Man at 8:19 PM No comments: